I thought I had already posted this but apparently I haven't.  Back in 2013, Cricut had a contest using designs from their Southwest cartridge.  I rarely enter contests where skill determines the winner, but I had an idea for something I wanted to make as a gift for my two-year-old nephew anyway so I decided to enter.  I actually won!!  I couldn't believe it!  It was a great gift package worth nearly $500!  I've never won anything like that before or since.

Here is the teepee I made: 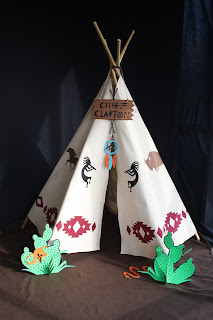 I made the extra props just for the contest.  I didn't even give him the cacti or critters. 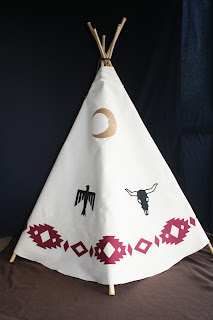 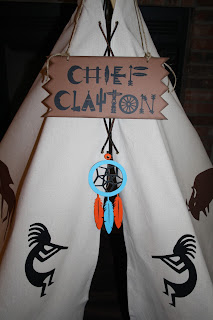 Close up of the sign I made.  I created the letters using various shapes on the Southwest cartridge.  I enjoy challenges like that. 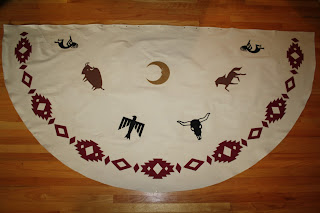 This was what it looks like unassembled.
I made the teepee from a canvas dropcloth.  For the poles I cut bamboo from my mother-in-law's yard.  The designs are fabric appliques cut from the Southwest cartridge.  If you are interested in more details on how to make this, you can find the instructions on the Cricut website HERE.
I was pretty proud of it, but I was really shocked when I learned I had won.  I had so much fun making this I have made three more since.  One was identical to this one, one was plain, and one I recently made customized for my two-year-old grandson.  (I hope to post that one later.)
Posted by Dianna at 1:20:00 AM