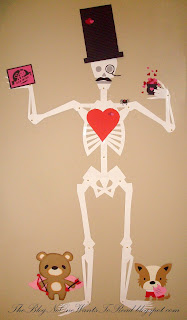 Well, I told you Mr. Bones would be making appearances from time to time.  As I mentioned previously, when I created Mr. Bones I had no idea how much fun he would be.  This post is about the Valentine's Day following his creation.  This was where the real fun began because the whole family got involved.

I had decorated him for Valentine's Day (most likely in the middle of the night while the family was asleep) and apparently my family thought they would add to the fun.  On Valentine's Day my husband (not much of a romantic, but sometimes he at least tries) left his Valentine wishes for me on a large heart placed on the skeleton.  (I was impressed he had cut the heart out by himself!  He just got lucky he didn't use some of my treasured paper!)

At some other time (I can't remember if it was before or after my husband's addition) my daughter added the moustache and monocle.  (Or maybe it was the hat and monocle.  Or maybe all three.)  I got a big kick out of both of them joining in on the fun! 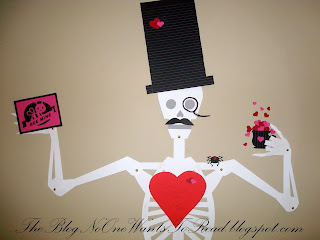 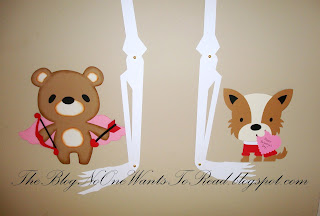 This was four years ago, so I don't remember the details all that well.  (I barely remember yesterday).  Most of the accessories I made were from Cricut cartridges.  The Valentine card (Bee Mine) was from the Spring Holiday Cards cartridge.  The teddy bear and accessories were from the Teddy Bear Parade cartridge.  The dog is from Create a Critter.  The hearts (other than the one my hubby cut out) were probably various punches.  I can't remember where the teacup was from, possibly cut using my Slice machine.

This was one of the best Valentine's Day surprises for me.  I loved it!

If you missed my other posts about Mr. Bones, you can read about him HERE and HERE
Posted by Dianna at 1:54:00 AM 1 comment: