Since it is quite obvious that I am never going to catch up posting previous creations, I might as well start with the one from today while it is fresh in my mind.  I made this card for a friend of mine for a housewarming gift.  I was unable to make it to the actual party (over a month ago) due to being on vacation, so when she invited our Sunday School class over I thought that was as good a time as any to give her the card.  I have been working on the card off and on this whole time, trying to learn my Silhouette software.  I got very frustrated at times, but I'm glad I soldiered on and won the battle.  Most everything cut with the Silhouette Cameo would have taken MUCH less time to just cut by hand, but I was determined to learn the machine and software.  I would learn a little and then by the time I got around to it again, I had forgotten what I learned and would have to start over.  (Ugh)

After the frustrating part was over, I had great fun adding all the details.  As always, the end result was much different than my original plan, but this was one I was actually pleased with. 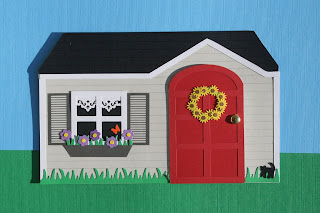 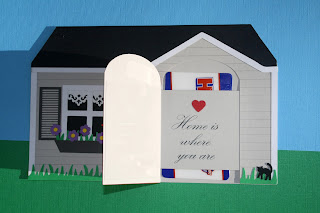 The door is huge for a reason.  That was the main feature in order to place a gift card behind it.  I "built" the house to fit the door.  :-)  The window design changed several times before settling on this somewhat plain one.  The shutters were from the hen house Silhouette file by Jillibean Soup.  The grass was a border punch, as was the window valance.  The kitty, wreath, flowers, and tiny butterfly were various punches.  I drew lines for siding and roofing (can't really see the roof detail).  The doorknob is a brad.  I got the inside sentiment from the internet and just printed it and added a punched heart.

The actual card is just the house.  The "sky" and "grass" were just used for photographing the card, but I really like how it looks so I might just have to recreate it as a scrapbook page.  ;-)  The card only opens at the door.  I went back and forth as to whether or not the entire house should be hinged.  I even made the back hinged, but I whacked it off when I decided it was too flimsy to open the whole house (and I didn't want to stay up any longer to add more support).  Decision-making takes way more time than any crafting I do.  (Sigh)
Posted by Dianna at 11:28:00 PM 1 comment:

Just posting this example of Kate's Kitchen cutting lines to help someone.